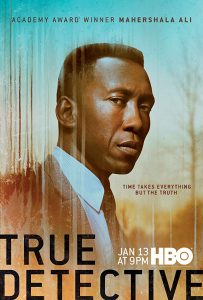 John Brooks, a former crime-scene investigator with the Fayetteville Police Department and a criminology instructor in the J. William Fulbright College of Arts and Sciences at the University of Arkansas, was chosen as a Police Technical Advisor on True Detective Season 3.

The popular television crime drama was filmed on location in Northwest Arkansas and starred Academy Award winner Mahershala Ali. Brooks spent much of 2018 working on True Detective. The third season aired on HBO in January 2019.

In an interview with the University of Arkansas's Research Frontiers Magazine, Brooks described some of his experience working with the crew. "They would ask questions procedurally. In one scene, there’s the ransom note and with the ransom note, 'would they wear gloves, would they not wear gloves'? The FBI in 1980 would have been wearing gloves," Brooks said. "But sometimes it’s more dramatic to use a pen and a handkerchief rather than putting on silly gloves.”

"If you found an open door, you wouldn’t just walk in that room. You’d have your weapon out and be prepared to defend yourself,” he said of another scene he advised on.

Early on in the production process for True Detective Season 3, the team told Brooks they may not always follow his expert guidance. "If you tell them something, and they don’t take your advice, don’t get your feelings hurt, because that’s just not the way this works," he said.

Brooks also told the Fayetteville Flyer the show’s producers went out of their way to find unique shooting locations.

“The person that scouted all of this did a fantastic job of finding places that I didn’t even know existed,” Brooks said. “I think people around here will be very happy and there will be a lot of pride [about how Arkansas is portrayed].”

Listen to John's interview about his experience on Short Talks From the Hill, a podcast from the University of Arkansas:

A Few in Fayetteville Get Friday Night Peek at True Detective

What Would Happen Here’; Instructor Talks About His Work on ‘True Detective’

'This is What Would Happen Here'; Criminology Instructor Discusses 'True Detective' Experience

When Hollywood Came to Town

University of Arkansas Research Frontiers magazine
We use cookies on our website to give you the most relevant experience by remembering your preferences and repeat visits. By clicking “Accept All”, you consent to the use of ALL the cookies. However, you may visit "Cookie Settings" to provide a controlled consent.
Cookie SettingsAccept All
Manage consent

This website uses cookies to improve your experience while you navigate through the website. Out of these, the cookies that are categorized as necessary are stored on your browser as they are essential for the working of basic functionalities of the website. We also use third-party cookies that help us analyze and understand how you use this website. These cookies will be stored in your browser only with your consent. You also have the option to opt-out of these cookies. But opting out of some of these cookies may affect your browsing experience.
Necessary Always Enabled
Necessary cookies are absolutely essential for the website to function properly. These cookies ensure basic functionalities and security features of the website, anonymously.
Functional
Functional cookies help to perform certain functionalities like sharing the content of the website on social media platforms, collect feedbacks, and other third-party features.
Performance
Performance cookies are used to understand and analyze the key performance indexes of the website which helps in delivering a better user experience for the visitors.
Analytics
Analytical cookies are used to understand how visitors interact with the website. These cookies help provide information on metrics the number of visitors, bounce rate, traffic source, etc.
Advertisement
Advertisement cookies are used to provide visitors with relevant ads and marketing campaigns. These cookies track visitors across websites and collect information to provide customized ads.
Others
Other uncategorized cookies are those that are being analyzed and have not been classified into a category as yet.
SAVE & ACCEPT